The ceramics of Caltagirone

An ancient know-how, handed down from generation to generation from prehistory to the present day.

The production of ceramics (from the Greek kèramos, clay) is one of the most ancient arts of humanity. And Sicily, a crossroads of different cultures and ethnicities, collects countless and wonderful testimonies that date back to the Neolithic period.

Caltagirone is the Sicilian city that has distinguished itself the most for the tradition of its now famous maiolica, an art so deeply rooted in the city that it has defined its very name: from the Arabic Qal'at Al Ghiar Caltagirone means exactly “City of vases”. But Caltagirone's strong link with ceramics is also and above all due to the vocation of its territory: a place once rich in clay quarries and surrounded by numerous woods rich in “Rusedda” a shrub typical of the area and particularly suitable for firing in the kilns used by ceramists.

The ceramics of Caltagirone has a very ancient history, that for millennia has seen generations and generations of ceramists reinterpreting in an ever original way over the years with decorations, colours and uses that fully reflected the trends of the time, to make the city of Caltagirone the City of Ceramics, the excellence of Made In Italy today. 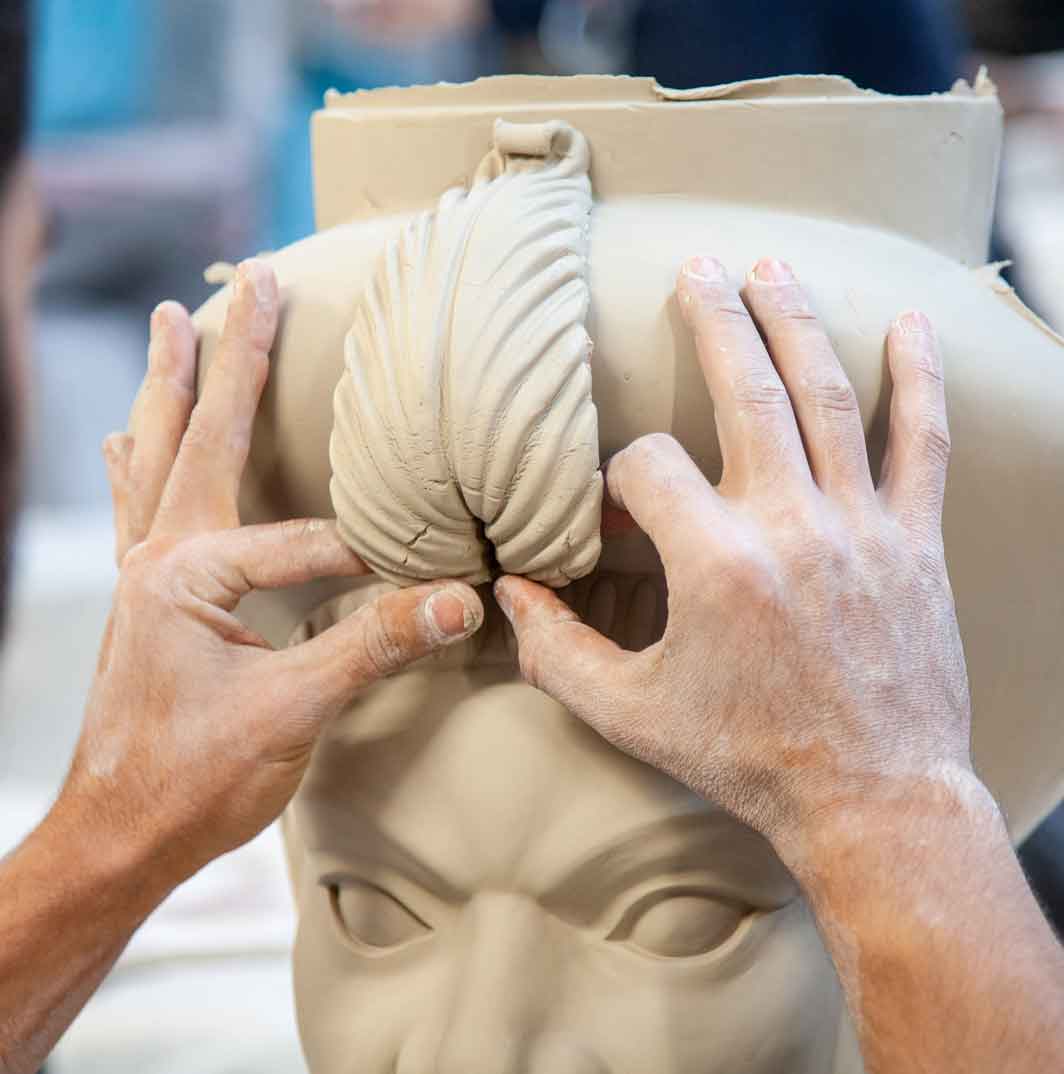 The origins of Caltagirone ceramics
Archaeological evidence brings us back to the seventh millennium B.C. when, in addition to hunting, humans began to make a living from agriculture and the need to preserve the fruits of their labour in vases arose. Splendid examples of ceramics have come back to us from excavations in the Neolithic villages of Scala, Pile and S. Ippolito. Caltagirone, as well as the whole of Sicily, underwent various dominations over the centuries: from the Greeks to the Romans, to the Byzantines and Saracens, but it was definitely the Cretan domination (around 1000 B.C.) that revolutionised the activity of ceramic artisans, introducing the “lathe", and the Arab domination (in 827) that transferred new techniques, forms and decorations to the population.
It was the contamination between all these different cultures that determined the development and splendor of the Caltagirone's maiolica as well as its most representative artefacts such as the Moor's heads, the pine cones, the owl... now emblematic symbols of Sicilian ceramics.

This is an important cultural inheritance that is impossible to disregard, a heritage of knowledge, techniques and the know-how that Agarèn has always carried forward in its collections, combining the ceramic tradition with a modern design that blends historical memory with contemporary living, creativity and ceramic technique with design, colours and glazes with the most contemporary trends.

We use cookies on our website to give you the most relevant experience by remembering your preferences and repeating visits. By clicking on "Accept all", you consent to the use of ALL cookies. However, you can visit "Cookie Settings" to provide controlled consent.
Cookie SettingsAccept everyone
Manage consent

This website uses cookies to improve your experience while you navigate through the website. Out of these, the cookies that are categorized as necessary are stored on your browser as they are essential for the working of basic functionalities of the website. We also use third-party cookies that help us analyze and understand how you use this website. These cookies will be stored in your browser only with your consent. You also have the option to opt-out of these cookies. But opting out of some of these cookies may affect your browsing experience.
Necessary Sempre abilitato
Necessary cookies are absolutely essential for the website to function properly. These cookies ensure basic functionalities and security features of the website, anonymously.
Functional
Functional cookies help to perform certain functionalities like sharing the content of the website on social media platforms, collect feedbacks, and other third-party features.
Performance
Performance cookies are used to understand and analyze the key performance indexes of the website which helps in delivering a better user experience for the visitors.
Analytics
Analytical cookies are used to understand how visitors interact with the website. These cookies help provide information on metrics the number of visitors, bounce rate, traffic source, etc.
Advertisement
Advertisement cookies are used to provide visitors with relevant ads and marketing campaigns. These cookies track visitors across websites and collect information to provide customized ads.
Others
Other uncategorized cookies are those that are being analyzed and have not been classified into a category as yet.
ACCETTA E SALVA
Powered by