Moor's heads: a story of love and jealousy 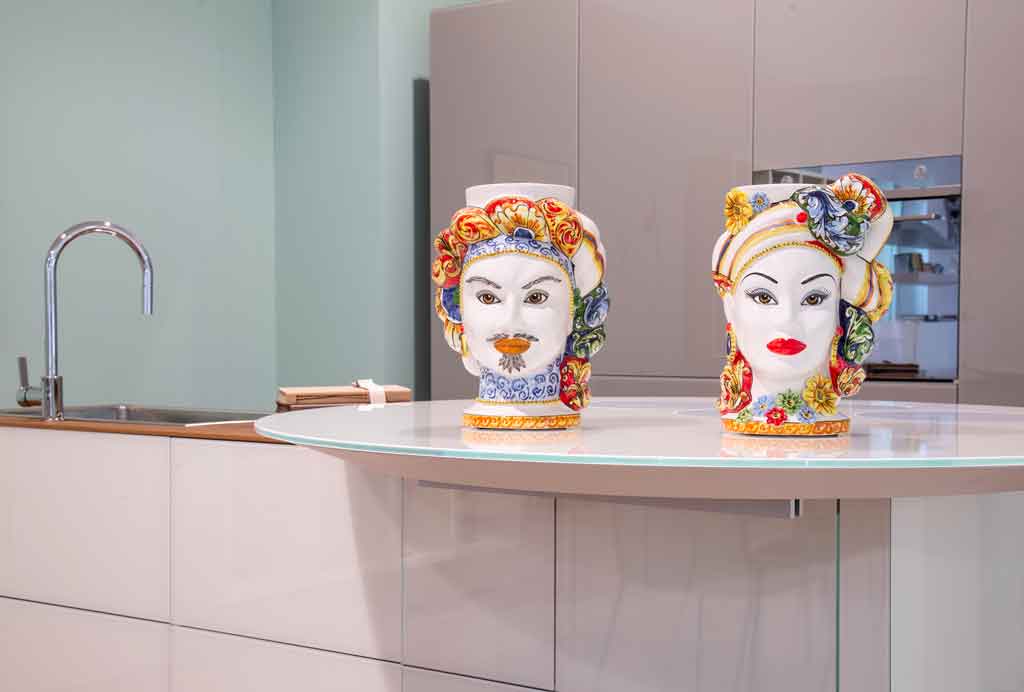 The Moor's heads are now one of the most well-known symbols of Sicilianity, as well as having become a design object with great artistic value, the result of Caltagirone's artisan tradition.

In Sicily, people used to come across these marvellous ceramic vases with anthropomorphic features by simply walking through the streets of the historic city centre.
Their tradition, in fact, is very ancient and dates back to a legend from the 1100s featuring a charming Moor and a young Sicilian maiden.

The legend tells that during the moorish domination in Sicily around 1000, in the arabic district of Palermo “al hàlisah” that a moor who, overwhelmed by a violent passion, declared his love to her.

Noticed means “the chosen one”, a sweet girl the young girl charmed by his promise of love reciprocated. However, the moor was hiding a terrible truth. He already had a wife and children back home.

So, when the girl discovered it, she decided to keep his beloved face with her forever. Without hesitation, she cut off his head and create a vase in which she planted a basil shoot.

This aromatic plant has always had an aura of holiness as it represents the rulers’ plant. In this sense, that terrible act was justified by her absolute love to continue to take care of her beloved young moor. Every day in fact, the tears of the young heart-broken girl watered the plant of basil that kept thriving and flourishing.

And all the neighbours, inebriated by that sent of the beautiful plant, started to commission clay vases shaped as a moor head. 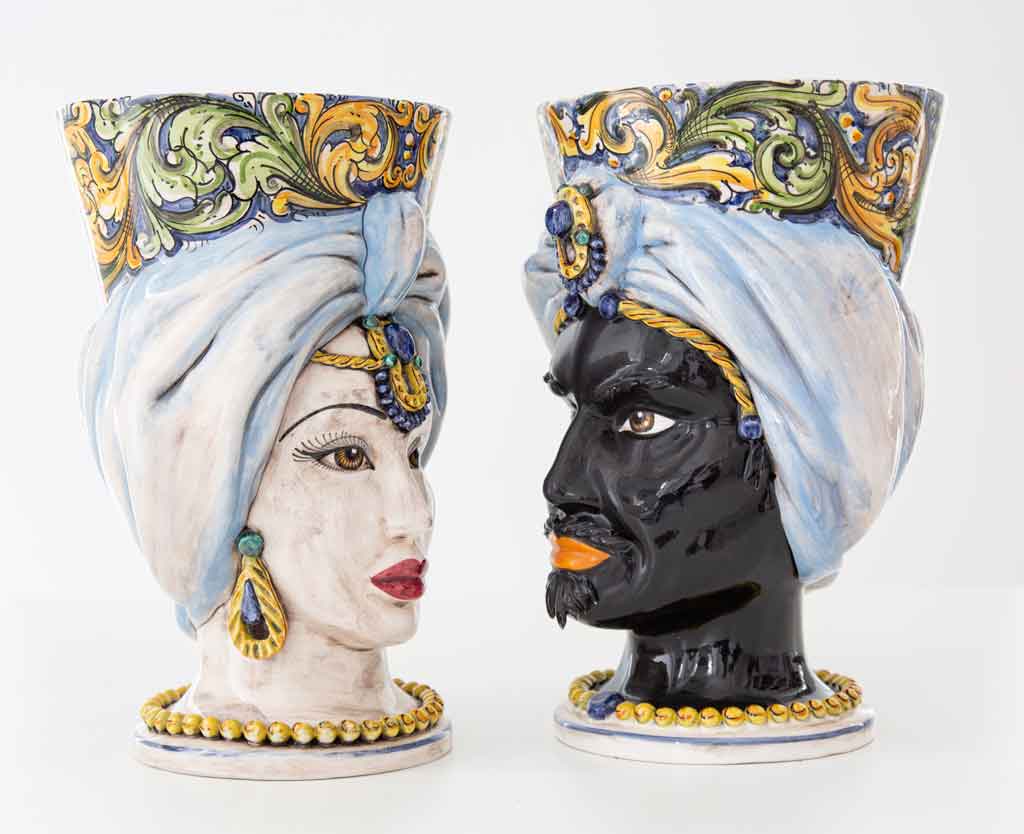 The Moorish Heads with typical decorations
The prevailing motifs are those inspired by the plant world, the Sicilian carts, the geometric and linear motifs to finally reach the traditional decor of Caltagirone. The use of yellow, cobalt blue and rummy green are in fact traditional techniques and colours whose echo continues to the present day. 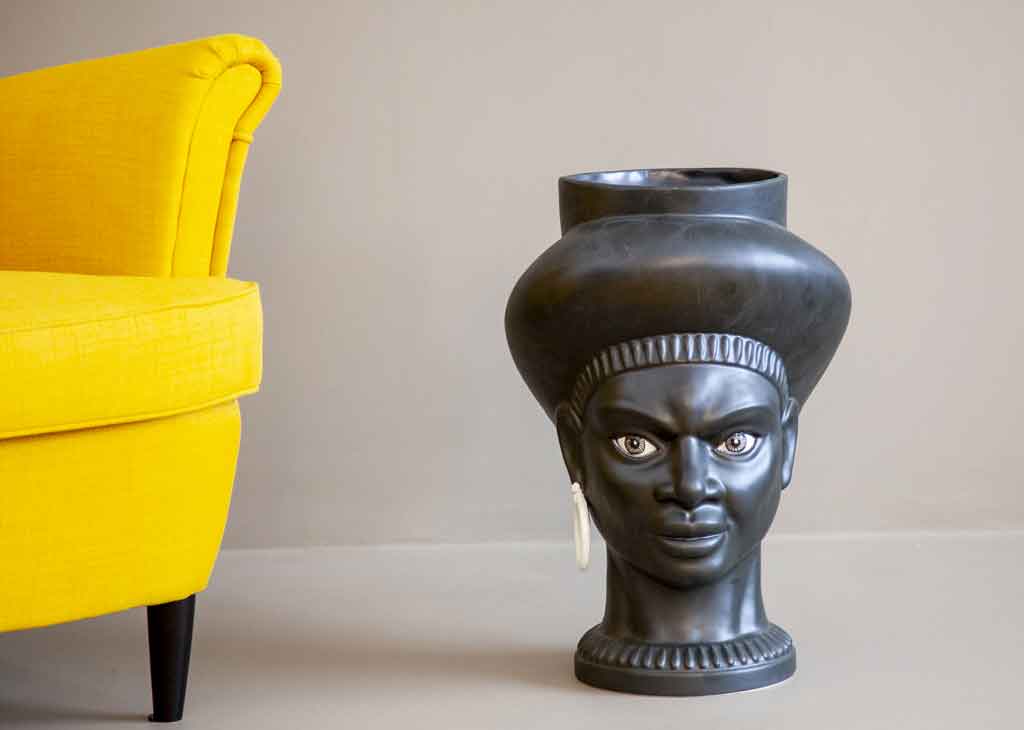 Monochrome Moorish Heads
Monochromatic ceramic is the expression of an art that, without chromatic features, conveys all its beauty. White and black, matte and glossy, make the Moors protagonists. Non-colours become colours that are combined with an environment which is both traditional and decorative. 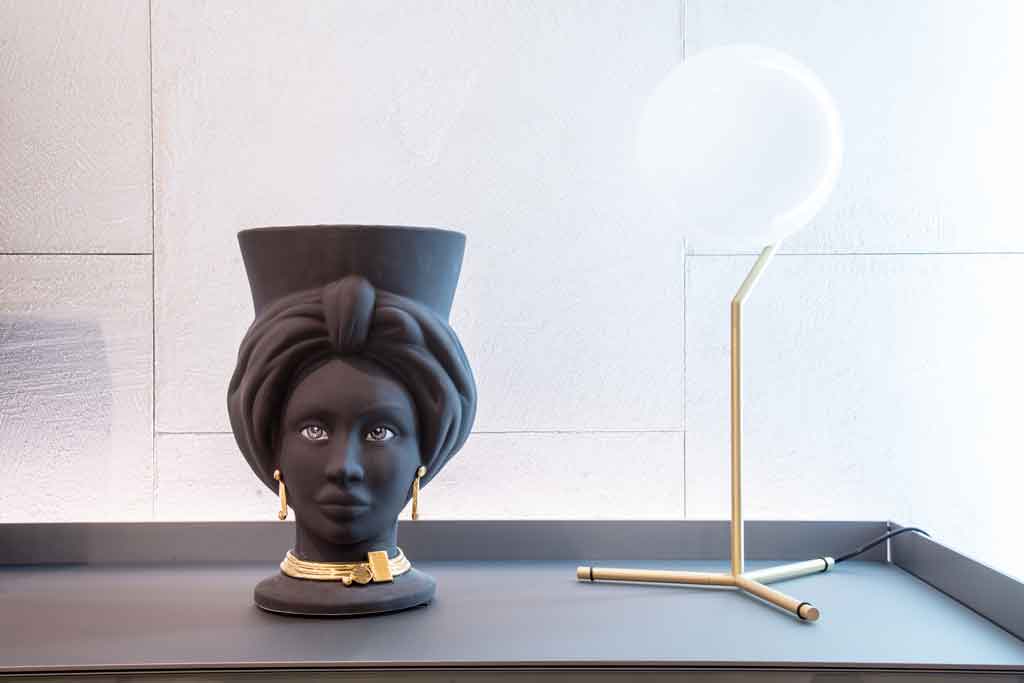 Lux Moorish Heads
Real treasures of Sicilian craftmanship. The skilful application of the precious materials, such as gold and platinum, completes the various production phases, thus transforming the Moorish Heads into precious and refined design objects.

We use cookies on our website to give you the most relevant experience by remembering your preferences and repeating visits. By clicking on "Accept all", you consent to the use of ALL cookies. However, you can visit "Cookie Settings" to provide controlled consent.
Cookie SettingsAccept everyone
Manage consent

This website uses cookies to improve your experience while you navigate through the website. Out of these, the cookies that are categorized as necessary are stored on your browser as they are essential for the working of basic functionalities of the website. We also use third-party cookies that help us analyze and understand how you use this website. These cookies will be stored in your browser only with your consent. You also have the option to opt-out of these cookies. But opting out of some of these cookies may affect your browsing experience.
Necessary Sempre abilitato
Necessary cookies are absolutely essential for the website to function properly. These cookies ensure basic functionalities and security features of the website, anonymously.
Functional
Functional cookies help to perform certain functionalities like sharing the content of the website on social media platforms, collect feedbacks, and other third-party features.
Performance
Performance cookies are used to understand and analyze the key performance indexes of the website which helps in delivering a better user experience for the visitors.
Analytics
Analytical cookies are used to understand how visitors interact with the website. These cookies help provide information on metrics the number of visitors, bounce rate, traffic source, etc.
Advertisement
Advertisement cookies are used to provide visitors with relevant ads and marketing campaigns. These cookies track visitors across websites and collect information to provide customized ads.
Others
Other uncategorized cookies are those that are being analyzed and have not been classified into a category as yet.
ACCETTA E SALVA
Powered by